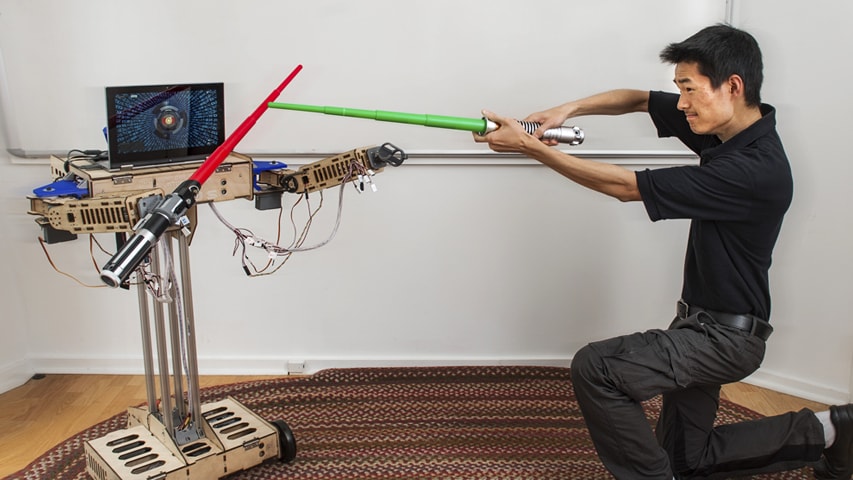 A lightsaber-wielding robot challenges John Choi to a duel. The rising Carnegie Mellon University senior is preparing for the National Maker Faire, one of the flagship programs of the White House’s National Week of Making.

Choi and his robot, along with CMU leaders, will be recognized for their contributions to the Maker Movement June 17–23.

The Pittsburgh Technology Council’s CREATE Pittsburgh initiative recently named the robot among its Top 10 Design and Maker Projects of the Year.

A CMU Center for Innovation and Entrepreneurship Undergraduate Innovation Scholar, Choi plans to bring an easy-to-build robot kit to market following graduation through his startup, Choitek.

He credits CMU's Bachelor of Science and Arts (BCSA) program with giving him the opportunity to pursue courses in computer science, game design, engineering and the arts.

"The BCSA program gives me the flexibility to learn everything I need at a pace that is personalized for me," Choi said.

The White House today recognized CMU for its leadership of the MakeSchools Alliance, launched in fall 2014 with support from Bucknell, Case Western Reserve and Cornell universities. Forty-eight member institutions share best practices for deploying maker-based education or "makerspaces" on their campuses.

"This collaboration holds the potential to reshape the way we think and collaborate in maker-based education," said Daragh Byrne, a MakeSchools Alliance leader and Intel Special Faculty for Physical Computing, Responsive Environments and Emerging Media at CMU.

"We're building bridges across campuses, sharing ideas and exploring new models of education and innovation that we think will be exciting, productive and inspire creativity for a new generation. When minds and hands come together to build something new, great things can happen," Byrne said.

Alliance members will discuss overcoming barriers to access and inclusion in making, and developing new pipelines for making across K-12 and higher education during a June 21 workshop in the nation’s capital.

CMU Provost Farnam Jahanian was among higher education leaders who submitted a letter to President Obama in honor of the Week of Making.

"Andrew Carnegie understood the power of making when he founded Carnegie Mellon University more than a century ago; it was his conviction that, while book learning was important, the 'education of the hand' was fundamental to progress and growth, for individuals, communities and nations," Jahanian wrote.

The provost highlighted CMU's new commitments to making, including the development of the College of Engineering's new MakerWing and the future ANSYS Building, a 30,000 square-foot facility that will feature a simulation and collaboration lab and a large open bay facility for students to build full-scale projects.

He also shared the success of existing programs, including the Integrative Design, Arts and Technology (IDeATe) Network. About 800 undergraduate students from all majors annually participate in 30 interdisciplinary studio-based courses in areas like physical computing, intelligent spaces and game design.