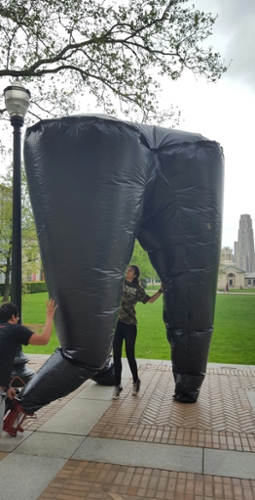 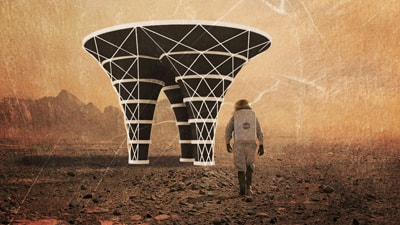 Carnegie Mellon students tend to be fairly strategic when planning their course selections. There's a lot to consider: requirements they need to fill, schedule constraints, number of units, topics covered. But sometimes fate can play a role and a student will find a course that they didn't even know they were looking for. Such was the case for Morgan Reed when she took Responsive Mobile Environments/Building an Atmosphere in Spring 2016 with Architecture/IDeATe professor Daragh Byrne and his colleague Christina Ciardullo.

"I just kind of ran into it," says Reed, a sophomore from Civil & Environmental Engineering, describing her discovery of the course through a friend. Responsive Mobile Environments/Building an Atmosphere, often called Mars Habitat for short, was a new IDeATe course offered for the first time in the spring. Byrne and Ciardullo decided to focus on Mars due to NASA projections that humans will be present there as early as 2030. Living systems must be deployable well before then, presenting a unique challenge that needs input from architects, engineers, designers, artists, and scientists. Students were tasked with combining their skills to design a prototype for a sustainable habitat for plants and would ultimately present their ideas to representatives from NASA, the European Space Agency, and SproutsIO.

The course immediately piqued Reed's interests in space. She was curious to explore the civil engineering challenges that are emerging as space habitation increasingly moves out of the realm of science fiction. "It’s such a different terrain," says Reed, noting that designing and building structures on a planet like Mars will require creative approaches. Reed was also drawn to the prospect of following a project from idea to fruition.

One of the goals of the IDeATe curriculum is to foster collaborative learning experiences in interdisciplinary settings. While this is enriching for students, it can also present a few challenges. Reed admits that the diverse makeup of the course was initially intimidating. With School of Architecture and School of Design students leading early discussions of how their habitat structure should develop, Reed remembers being unsure of how to assert herself and her ideas as an emerging expert. But she soon felt inspired by the intelligence, creativity, and skill in the room. "It pushed me to want to understand my own skills better," she says. Reed developed a deeper respect for the skills and talents of her fellow students as well as a new level of enthusiasm for her future as a civil engineer.

As for future plans for the next few years and beyond, Reed is pursuing an IDeATe minor in Animation & Special Effects and she is eager to identify more new perspectives to her civil engineering practice. For instance, she would like to explore the use of virtual reality as a way to identify possible engineering flaws in designs. Reed is also looking forward to further collaborative experiences and having her ideas celebrated and challenged in the classroom. "You won’t learn from people agreeing with you all the time!"