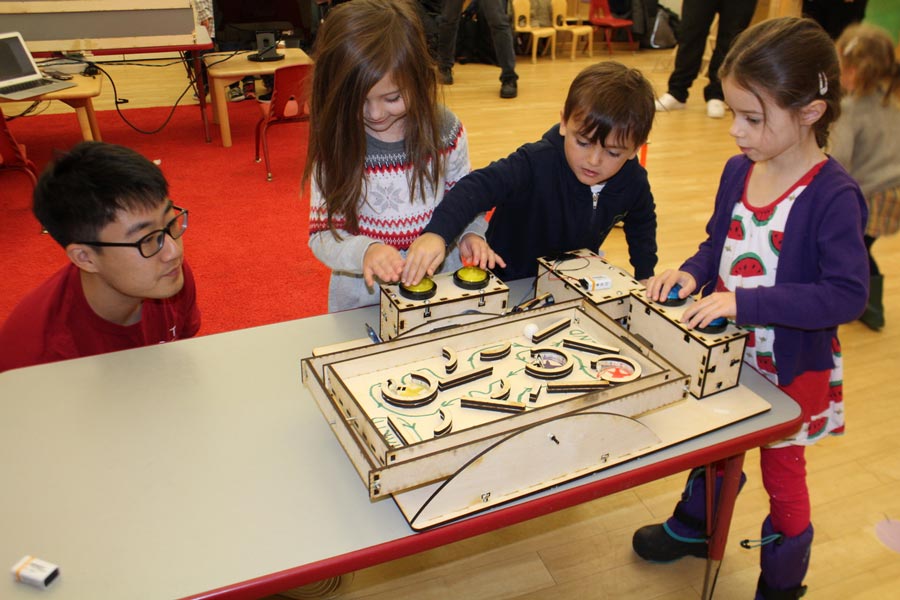 Researchers and Designers at Play

This story originally appeared on cmu.edu/dietrich.

Part of the Psychology Department, the Children’s School partners in developmental psychology education at CMU and in the broad early childhood development community.

Other CMU departments across campus partner with the school to conduct user testing for children-oriented projects in areas such as software development and product design.

In the past, design students have conducted user testing for Crayola on art supplies for children with disabilities and for Radio Flyer on designs for riding toys.

Zeglin hopes to teach his students how subtle details in engineering and design make a big difference in a project’s success.

Through play and observation, the children’s interactions show students which parts of their robots may be intimidating or confusing. The discoveries inspire the kind of necessary improvements that are typically not apparent until a product is used, such as applying a green color to suggest a “start” function or replacing a scratchy material with soft fabric.

“Allowing kids and families to ‘peek behind the curtain’ into how things are designed, built, and tested is such a great way to show that we're all always learning and trying new things,” Grabman said.

Zeglin now fulfills a dual role as a Children’s School parent and a faculty member. His oldest is enrolled in the Kindergarten class, and his second son will begin next fall.

About 15 percent of the school’s families come from CMU faculty and staff.

“We’re inclusive to racial and economic differences and special needs. Between 20 to 35 percent of children are bilingual or trilingual. About one-third of the children attend on a scholarship,” said Sharon Carver, director of the Children’s School.

Allison Berger, a real estate professional, attended the Children’s School as a child and her daughter attended for two years. She likes that the school’s instructors review all of the research studies proposed by CMU-affiliated experimenters, as well as the user-testing experiences that CMU students design, and she understands that children can always opt to not participate.

“I consider it paying it forward. I feel that my participation as a child helped to advance knowledge in child development and has contributed to developing better learning environments for children,” Berger said.

Children wear “Ask Me About” stickers home on days when they participate in research studies, and educators write about both the research and the user testing in the school newsletter. The families enjoy learning about and participating in the projects at the school.

“Sometimes the smallest gesture can turn a project around,” Zeglin said. “Just watching the children and seeing what they do will reveal many, many details.”

Likewise, Zeglin feels his son benefits from participating. He is encouraged to explore and gains exposure to a university setting.

“He feels like he’s coming to college every day,” Zeglin said.