This story originally appeared on cmu.edu/news.

In an Introduction to Physical Computing class, six teams of students were paired with an older person from the Osher Lifelong Learning Institute and tasked with building something that would help them improve their quality of life. The students presented their final project prototypes Dec. 4 in IDeATe’s Physical Computing Lab in the basement of Hunt Library.

The teams produced an array of inventive solutions to the everyday problems of the older persons. One team invented a daily reminder device to counter forgetfulness. Another team built an appliance to help a home-publisher file her documents. And one team designed a trivia game based on Bingo to help a grandfather bond with his 6-year-old granddaughter as she grows up.

Other teams created a walking cane to help cope with some of the debilitating symptoms of Parkinson’s Disease, designed a linear toggle to turn on exterior home walkway lights, and created an automated yarn spooler to save time and avoid repetitive injury syndrome.

“Now I’ll have no excuses to get my projects done,” joked Rebecca Hebert, a 67-year-old Carnegie Mellon alumna who knits scarves, tableware and other items to sell from her Edgewood home. “This will save me time, money and won’t hurt as much.”

“We wanted to see if we could reinforce the habit of filing papers when she had them in her hands,” said Chung, a 21-year-old junior information systems major from Seattle. “Hopefully it will get her in a better habit of putting things in the right place instead of putting things on the floor.” 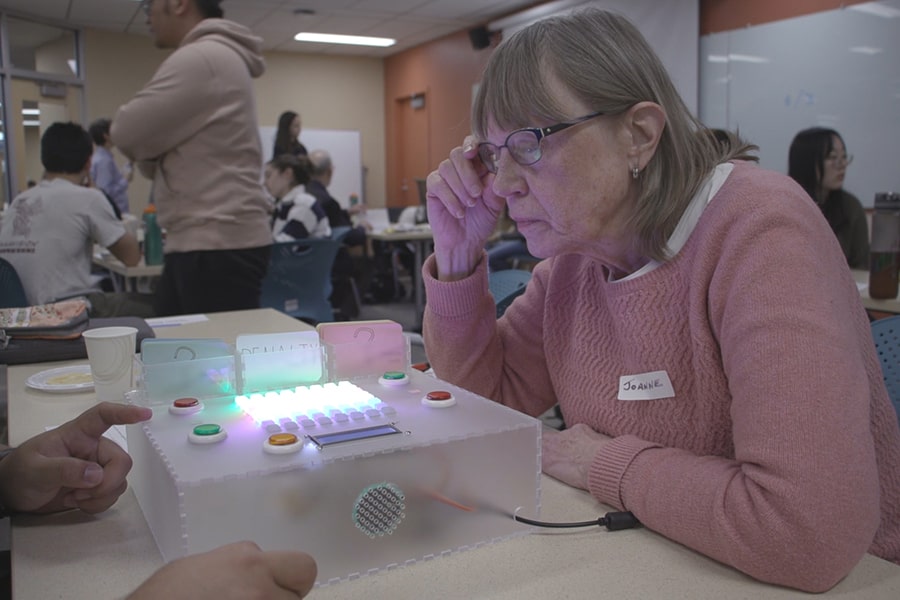 Joanne Wright, one of the Osher Lifelong Learning Institute participants in CMU’s Introduction to Physical Computing class, plays a trivia game developed by one of the student teams.

The teams were instructed to meet with their respective older person, many in their homes, to get a sense of their regular activities and daily needs, said IDeATe Adjunct Instructor Robert Zacharias, who teaches the course.

“The idea is to try and identify something they could build to improve their life in some way,” Zacharias said.

The 18 students in Zacharias’ section were mostly juniors and seniors, but also included graduate students and sophomores, he said. Their fields of study ranged from computer science, engineering and design, to drama, architecture and the humanities.

Though Zacharias said he wasn’t aware of any past class inventions being commercialized, he emphasized that the class prototypes would likely need many improvements before being sold in the open market.

“The name of the game is to make lots of mistakes,” he said. “These are their first attempts.”

The course also was devised as a rare opportunity to pair younger students with older adults, he added.

“It’s really rich to put students in dialogue with people who have actual problems that the students could actually help them with,” said Zacharias, who was himself a teacher’s assistant to the course when he was a CMU graduate student.

“It’s also valuable to create an environment where there’s a comfortable interchange between people of different ages,” he added. “Meeting with and trying to understand people who are different from the people students’ regularly interact with is good for everybody.”