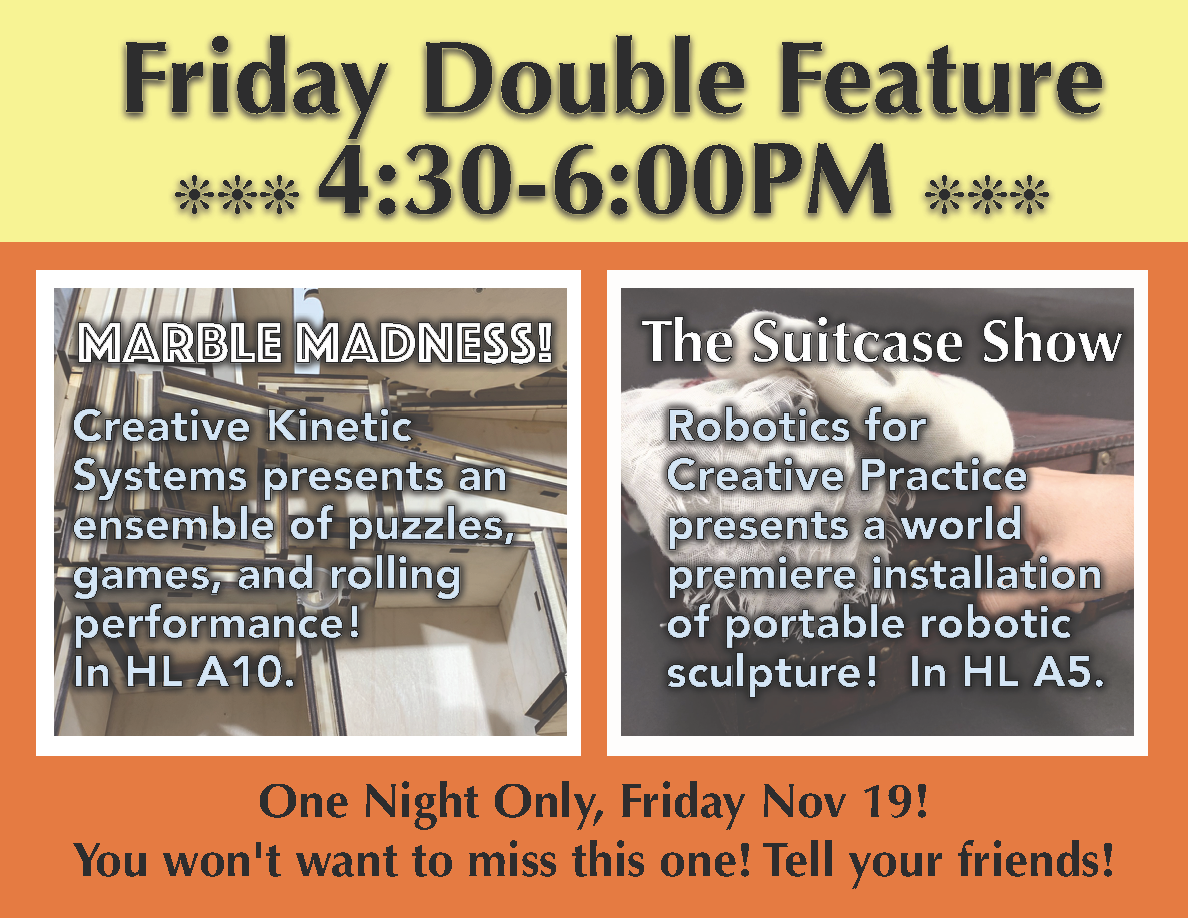 This Friday, November 19, 4:30-6:00pm, join the 16-223 Creative Kinetic Systems and 16-375/54-375 Robotics for Creative Practice courses as they premiere their Fall 2021 projects!
In the Physical Computing Lab (HL A10), Creative Kinetic Systems presents Marble Madness, an ensemble of puzzles, games, and rolling performance. Across the hall, in the Fabrication Lab (HL A5), Robotics for Creative Practice presents the Suitcase Show, a world premier installation of portable robotic sculpture.

The 2022 Pittsburgh Racial Justice Summit is happening on January 21-22, 2022! Planning is underway and the summit’s planning committee is soliciting session proposals to build out the program. The committee seeks to bring together activists, organizers, and educators with a depth and breadth of experience working toward racial justice at local, national, or global levels. They aim to provide sessions that critically investigate the centuries-long and global negative impact of white supremacy and colonization on communities of color and Indigenous peoples in the United States and worldwide.
Submissions are due November 19. Go here for more information.

ICYMI: A Glitch in the Matrix: A Panel Discussion with Filmmaker Rodney Ascher 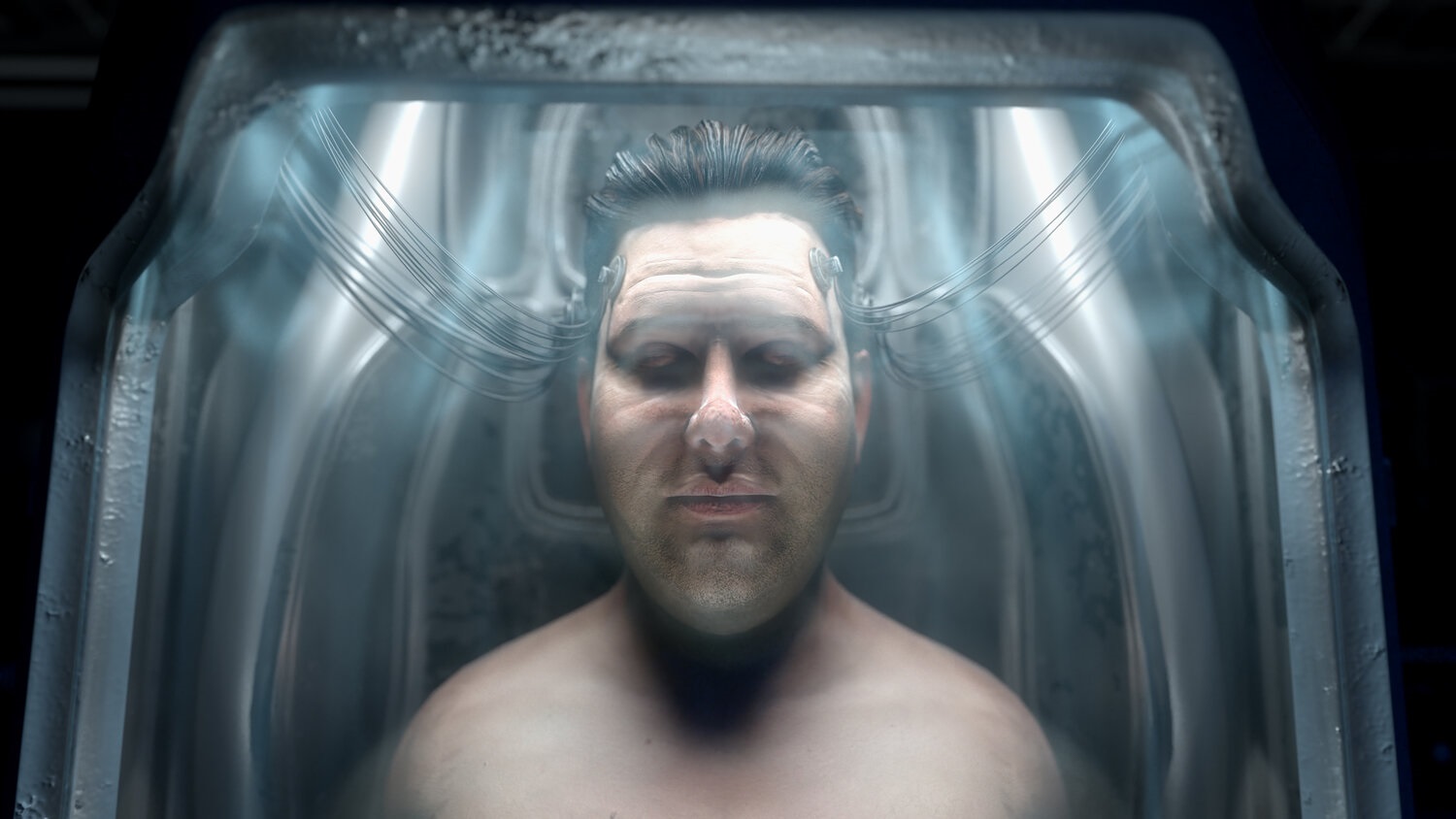 This virtual event is free and open to the public. Registration is required to attend the webinar.

For our inaugural Virtual Reality Day event, Carnegie Mellon University Libraries welcomes you to a panel discussion for a film unlike any other.

An official selection of the 2021 Sundance Film Festival, A Glitch in the Matrix is a groundbreaking remix documentary that explores simulation theory using in-depth interviews with experts and amateurs combined with cultural artifacts like popular video games and motion picture film clips to illustrate a mind-bending glimpse into the vortex of reality, and the University Libraries are honored to welcome the film’s director Rodney Ascher as our featured guest.

This panel discussion brings together several individuals from multiple disciplines on campus to join the filmmaker in conversation, including:

Rodney Ascher is a filmmaker known for creating documentaries that explore the subjective experience, freely appropriating the vocabularies of genre, experimental, and found-footage films along the way. His feature debut Room 237 was included on Owen Gleiberman’s top ten film list for 2012 in Entertainment Weekly and his follow-up The Nightmare was called “The Scariest Movie of the Decade” by BirthMoviesDeath.com. A Glitch in the Matrix is his most ambitious film to date and sold out both midnight screenings for its debut at the 2021 Sundance Film Festival. Learn more about Rodney and his films at www.rodneyascher.com.

Virtual Reality Day is a series of VR/AR events organized worldwide to help virtual and augmented reality become more mainstream. Any individual, company or organization can host a free public VR/AR event and become part of the Virtual Reality Day phenomenon. This is a completely voluntary and grassroots effort. It’s about bringing the energy and interests of the greater community together, and focusing that energy for the benefit of everyone on one special day. Find out more at www.virtualrealityday.org.

The IDeATe facilities will continue to adapt our operations as needed during COVID-19. Stop by resources.ideate.cmu.edu to read the latest on what to expect.

Get IDeATe Info Delivered To You

Join our newsletter, IDeATe Info, for weekly news and announcements during the academic year.